Barbecue and radio don’t have much in common beyond a shared association with really great backyard parties. But Aaron Sharpe (’00), former WNKU station manager and current co-owner of Lucius Q in Pendleton, credits his nearly two decades at the station for where it’s taken him—behind the doors of one of Cincinnati’s most buzzed-about barbeque joints.

As far back as he can remember, Sharpe was a fan of WNKU, NKU’s legendary independent radio station. He volunteered in the studio while studying at the University of Cincinnati, and, during the 1998-99 academic year, transferred to NKU specifically to gain a more hands-on role. While pursuing his degree in television and radio, he was hired to fill in temporarily for another staff member, and the position eventually turned permanent. Over the years, he became a fixture of the area’s indie music scene and beyond, making connections with up-and-coming bands and local business owners alike.

Two years before the station’s 2017 sale, Sharpe began exploring the possibility of opening a side business. “I knew I eventually wanted to do something different and work for myself,” Sharpe says. He and friend Jeff Keate, who had decades of experience in the restaurant industry, started looking into opening a music venue in Over-the-Rhine.

They had their sights set on what is now the Woodward Theater on Main Street, butanother interested party—the owners of MOTR Pub—acted first. They considered themusic venue now known as OTR Live, but it wasn’t the right fit. “We felt like it was a bigger bite than we could chew,” he says. The landlord there, however, owned another property two blocks east in Pendleton that he thought they should consider.

“I had been in Pendleton before, but I never really thought much about the neighborhood and its potential,” Sharpe says. “When we really looked at it with different eyes, in terms of having a business, that’s really what got us all excited about opening something up. We liked the idea of being off the beaten path.”

The pair could envision their music venue in the space, but they also saw potential for much more. “We thought, it’s not a traditional music venue, but it could be a cool bar with live music and maybe even food,” he says. “In many ways, we kind of worked backwards.” Keate’s close friend from high school, Tom Martin, had grown a reputation as the pitmaster at Smoq in Springdale, and Keate proposed the idea of opening a barbecue joint with Martin as their pitmaster. The two canvassed the neighborhood, asking residents how they felt about the concept, and reactions affirmed their notions. They brought on a third partner, Shane Spears, to oversee the business and financial side, and got started refining the idea. 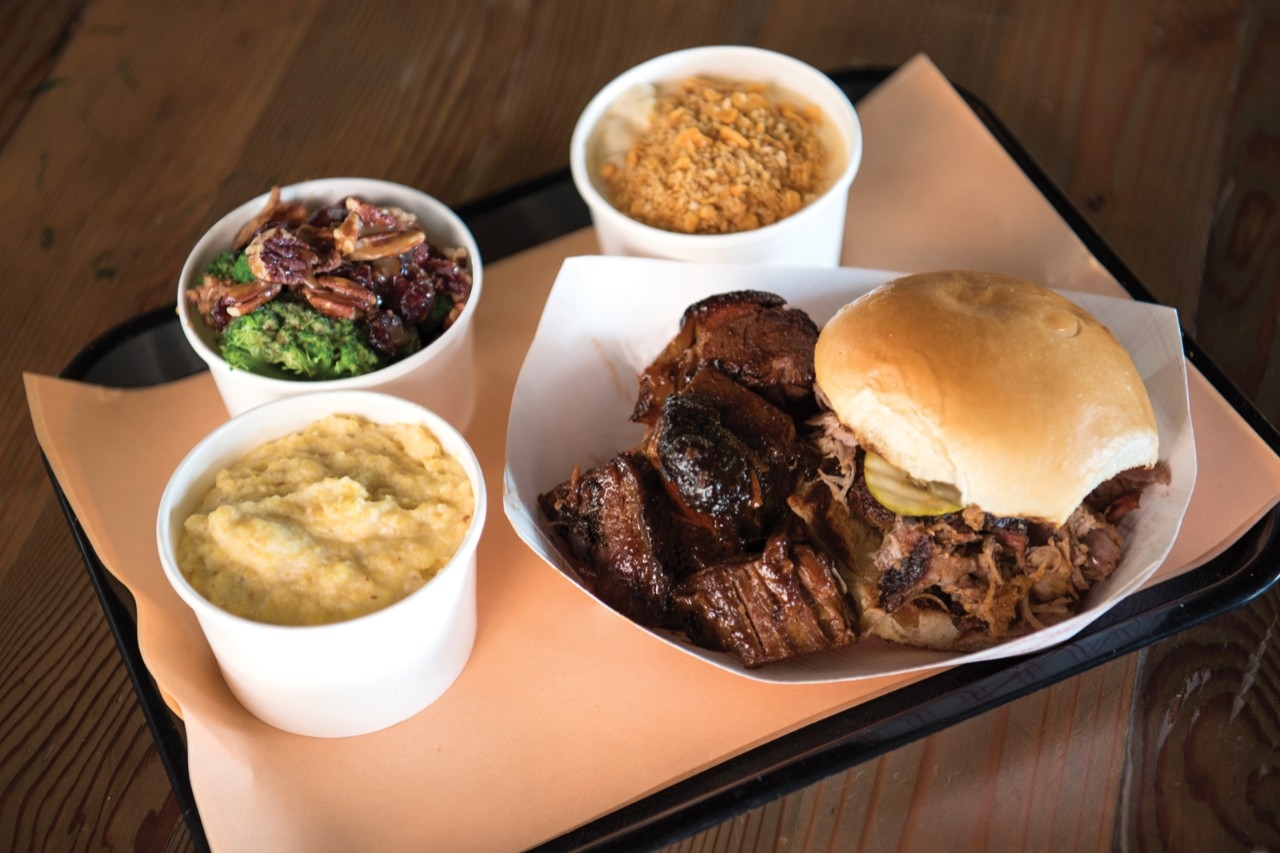 The three partners, along with Martin, traveled the country trying different styles of barbecue. They spent countless hours testing and tasting different rubs, woods and meats until they settled on their menu. “We call it Midwest barbecue,” says Sharpe, “but it’s just our favorite stuff from all over the country.”

Since opening last March, the restaurant pulls a steady crowd for smoky bites, libations and free live music every weekend. Sharpe is the first to admit he’s a fish out of water in the restaurant industry, but he credits the lasting connections from his time at WNKU with making it all possible.

In fact, he says the two aren’t that different at the end of the day: “When you come in on a Friday night and the garage doors are open, the band is rockin’, there’s a line out the door and people are having agood time, there’s nothing quite like that. We’re building community around food and music. In many ways it’s very similar.”