Everything in this professor's story is true, except the fake part.

Jessica Chiccehitto Hindman, a professor of creative writing at Northern Kentucky University, stands quietly behind the podium at Joseph-Beth Booksellers in Cincinnati, Ohio. She’s there to read an excerpt from her new memoir, “Sounds Like Titanic,” but, for now, she’s enjoying the looks on the faces of those in attendance.

Minutes before Hindman stepped forward, Tamaiya Wilson, a professional violinist and NKU alumna, performed for the crowd—not playing the violin but, rather, miming on her instrument to a CD of music suspiciously similar to the score from 1997’s “Titanic.” It was a bizarre scene, but this was no avant-garde artpiece. Instead, it’s a ruse—one Hindman knows all too well.

At one point in her life, Hindman was a fake violinist, too. And she’s spent years trying to make sense of the experience.

The daughter of a doctor and a social worker, Hindman grew up in two small, Appalachian towns in West Virginia (until she was 10 years old) and Virginia (through high school).

And though there’s plenty of fakery inher story, one thing is very true: She loves the violin and has since she was 4 years old,when she fell under the spell of Vivaldi’s “Winter” while watching “Sarah and the Squirrel,” a 1982 animated film about World War II that featured the composition. For four years, Hindman begged her parents for a violin. She dreamt of becoming a professional violinist and mentally played the few Vivaldi notes she could remember before falling asleep each night.

Then, shortly after her eighth birthday, Hindman’s parents caved. They bought her a violin and committed to driving several hours both ways through the mountains to Virginia for weekly lessons. Through high school, she dedicated herself to playing the violin, and locals in her hometown took notice. They told her she had a “reeyell” gift.

Hindman’s gift earned her an acceptance letter from New York’s Columbia University. Her parents pleaded with her to turn it down, but she was eager to leave Appalachia for the Ivy League. She enrolled as a music major and packed her violin for the move to Manhattan. Growing up in a doctor’s household, Hindman was aware of class differences between her family and others in the community. But when she got the $30,000 price tag for her Columbia education—an amount her family could not afford—her elevated standing flipped upside-down.

“I found myself coming from a town in which I was a doctor’s daughter… to going to an Ivy League school where I was seen as poor,” Hindman says. “I was privileged in one world and not in another.”

Hindman had convinced her family she could get a job to make up the difference in tuition cost, but, determined to become a professional violinist, she didn’t have much time for work. So, to afford her firstsemester of college, she sold her eggs to  a fertility clinic.

But while years of dedication and private lessons can make you the best in your small town, they don’t automatically lead to professional musicianship. Surrounded by more talented violinists, Hindman barelymade the cut for the college orchestra. After a few months, Hindman decided toface the music and changed her major to Middle Eastern Studies. 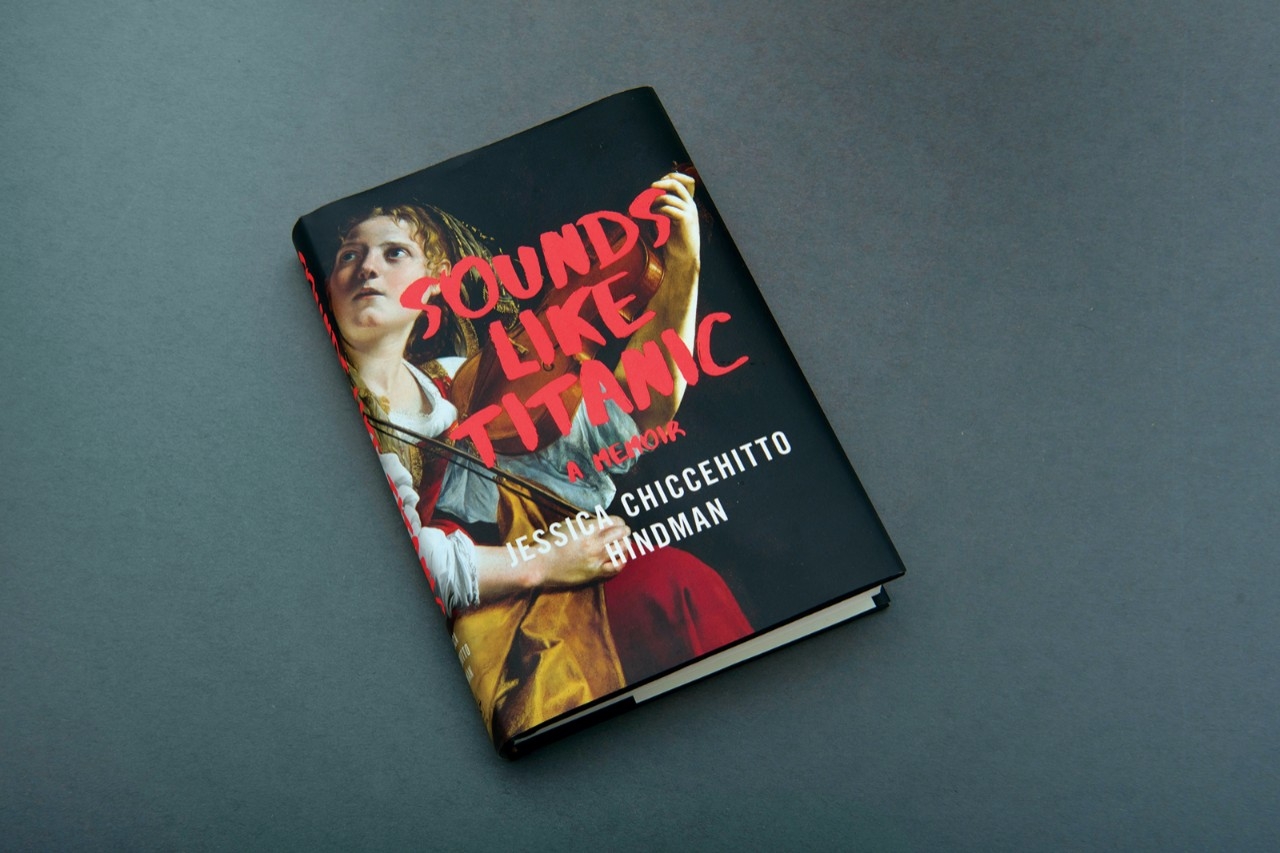 In the fall of 2001, Hindman joined astudy abroad program in Cairo, Egypt. A few weeks after landing at the Cairo International Airport, Hindman witnessed footage from back home in New York City—two planes had hit the Twin Towers. Many of her fellow students fled to Europe, as the home of one of the hijackers was just blocks from where they stood in Cairo, but she chose to stay and document her experiences for her hometown newspaper.

So began a new dream: becoming a Middle East news correspondent. Hindman studied Arabic and learned everything she could about Islamic literature, art and religion with the intention of bridging understanding between the U.S. and the Middle East.

Approaching her senior year at Columbia, Hindman was working two jobs and $8,000 behind on her tuition paymentfor the fall semester. She was starting to feel hopeless when she spotted a strange (but promising) advertisement on the student listserv that would allow her to play the violin with a professional, traveling orchestra:

“Seeking violinists and flute players to perform in award-winning ensemble that has performed on PBS and NPR and at Lincoln Center. Must be able to work every Friday, Saturday, and Sunday. $150/day with potential bonuses. Send résumé and demo tape to Becca Belge, Assistant Production Manager.”

Hindman’s dreams of becoming a professional violinist resurfaced immediately, and, just three days after submitting a demo tape, she was hired. Was it suspicious that she was given a W-4 form before she even finished what she thought was her audition? Sure, but this was her dream. She loved music and couldn’t give up a second chance to pursue it.

It all seemed too good to be true—largely because it was. On one of her first days on the job, she stood for hours in front of a microphone, holding her violin between her chest and neck. She did play, but the audience couldn’t hear her over the recording of a better violinist blasting overthe loud speakers. She hit wrong notes; no one knew.

This was no fluke—it was the job. The group pretended to play at craft fairs, in shopping malls, on national television and at Carnegie Hall, and the performance was always the same: the microphones were never plugged in, the musicians pretended as music very similar to “Titanic” (tweaked just enough to not violate copyright law) played over the stereo.

The man behind the music—whom Hindman refers to as The Composer—isn’t necessarily a villain. He stayed behind after every concert to meet fans and chat with them. His “work” gave audiences comfortin the years following 9/11. He wasn’t a bad man—he was just a phony.

“There was this contrast between great praise and the reality of knowing it wasn’t real,” she says. “It wasn’t guilt but more worry about what I was doing with my life. I knew there was a more authentic way to make a living.”

She completed her Ivy League degree and undertook a dogged job search, but Hindman could not find a newspaper that would hire a Middle Eastern war correspondent. She was rejected for a Fulbright scholarship in the final round just weeks before having to move out of university housing, so she continued to tour with the ensemble after graduation to pay down student loans and, hopefully, one day move abroad.

But things changed drastically for Hindman when, in the fall of 2004, she joined the ensemble on the 54-city PBS God Bless America Tour. The stress of pretending to perform atop an identity crisis manifested in debilitating panic attacks that invaded every part of her life—including performances. She recalls losing grip of reality in her personal life while a post-9/11 United States faced the beginning of the Iraq War. When the tour ended, Hindman quit the ensemble and moved back to her parent’s house in Appalachia for six months.

Playing in the ensemble had paid Hindman’s rent and tuition, but at a significant cost. When you ask her why she stayed on for four years, despite panic attacks and guilt and the grueling hours of pretend performances, she takes a deep breath.

“I was 21 years old and so grateful to have a job,” she says. “When we’re young, we’re even more susceptible to everyone else’s approval of us, and I think that was part of it. There’s also the lifelong continuation of that dream. Being able to say ‘I’m a professional violinist’ holds a certain cachet that ‘I’m a receptionist at an upscale spa’ does not.”

“There was this contrast between great praise and the reality of knowing it wasn’t real. It wasn’t guilt but more worry about what I was doing with my life. I knew there was a more authentic way to make a living.” —Jessica Chiccehitto Hindman

Hindman decided to return to New York, but she needed employment compatible with her full-blown panic attacks. (Working as a Middle East war correspondent whilebattling an internal war of her own was out of the question at this point.) She found a windowless cubicle job within Columbia’s medical school as an office assistant—it provided the health insurance that allowed her to function and free tuition for graduate school.

She joined the university’s Master of Fine Arts program and began writing what she thought would be an article about class and classical music that she could pitch to The New Yorker. But, she soon realized, her story was bigger than the ensemble experience—and she had no idea where to begin. Then, during a creative writing workshop, Hindman was given an assignment: Explore a structure she’d never worked with before and put her material in that form.

“I didn’t consider myself an experimentalist, but the whole thing opened up for me,” says the one-time journalist. “Once I started writing little fragments, I could tell the whole story.”

Hindman began piecing together the threads of her story, then ran into a wall after the first 50 pages. But during her second year in the MFA program, she applied for a teaching fellowship and found both her calling and a way forward with herwork.

“I learned so much about writing from learning how to teach writing,” she says. “I found some sort of identity—a professional identity outside of my personal life—where I felt like I was important and helping other people. Teaching gave me confidence I never had before; I stopped having panic attacks. From there, I knew this was something I could do.”

Teaching became central for Hindman,and she moved to Denton, Texas, to pursue a PhD at the University of North Texas. She became a Toulouse Dissertation Fellow in her final year, returning her focus to writing while applying to some 80 jobs—none of which she’d heard back about by January of the following year, just months from graduation.

“I was worried that everything that happened to me would happen again,” she says. “I would finish my dissertation and be right back in my parents’ basement—only this time I’d be Dr. Hindman.”

She began to write furiously and, for three months straight, produced between 3,000 and 4,000 words a day. To keep track of all her storylines—her childhood, moving from Appalachia to an Ivy League university, her time in Cairo, 9/11, The Composer, the ensemble—Hindman posted hundreds of color-coded index cards on a board on her apartment wall.

In the spring of 2013, she finished her memoir, wrapped up her dissertation and later became an assistant professor of English at New Mexico Highlands University, where she was also the director of the university’s Writing Center.

Fast forward six years to today. Hindman is a tenured professor of English at NKU. “Sounds Like Titanic: A Memoir” was recently published and is receiving praise from outlets such as NPR, Vox, Goodreads and O: The Oprah Magazine.

And, with her story finally down on paper, she’s gained a new perspective on it all.

“Bad for life; good for writing, right? I was obsessed with success and achievement,” she says. “Now I see that the emphasis on that was all wrong. I missed out on things forall the wrong reasons. There’s this idea that you have to be a mega superstar by the time you’re 25 years old.