For Emmy Award-winner Anna Becker, the story is its own reward.
By Rodney Wilson | Published Sept. 16, 2019 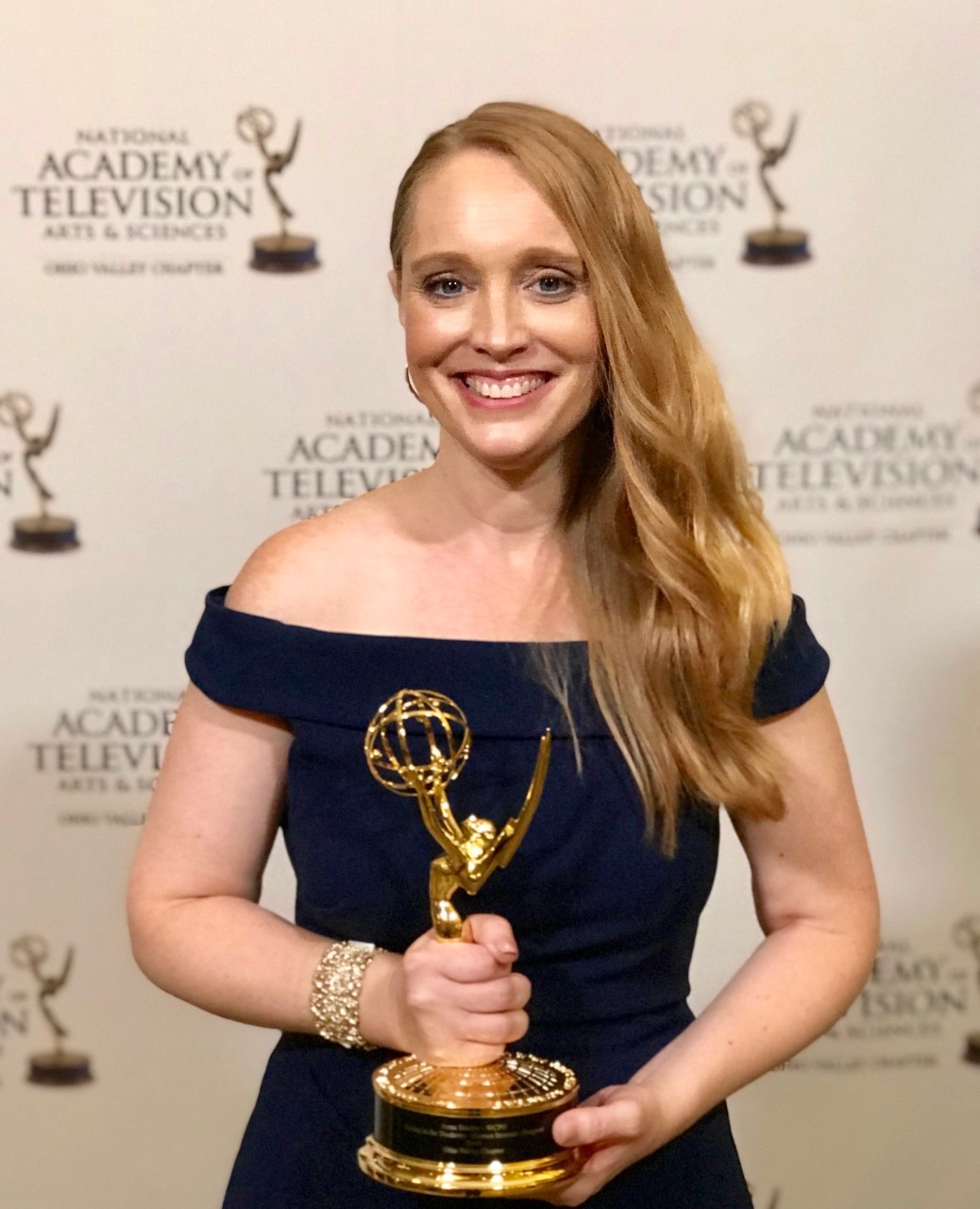 What’s the value of a good story?

Is it that a narrative can wind itself through public consciousness, inviting people to grapple with uncertainties? Perhaps it’s the way a story can personalize information, opening up avenues for critical thought and fresh, new perspectives on difficult topics? Or maybe it’s a brilliant golden statue, shiny and sized perfectly to perch center stage atop a journalist’s fireplace mantle?

Anna Becker (’00) is the first to tell you that her Emmy award, though cool, isn’t what gets her excited for work at Cincinnati news outlet WCPO every day. Rather, she’s proud of what the statue represents—the chance she’s had to work alongside talented journalists on special stories, such as “Living in the Shadows,” the comic-journalism collaboration that netted a best human interest program Emmy at the 2019 Ohio Valley Regional Emmys.

“I knew I wanted to do journalism when I was in high school,” she says, addressing a career aspiration that brought her to Northern Kentucky University, where she quickly found her place on the campus newspaper. “Being a part of The Northerner was definitely my most memorable experience. I was on the staff for all four years. I started out as a photographer, then, my senior year, I was editor-in-chief. That was really where I gained real-world experience.”

After graduation, Becker briefly worked for the Community Recorder network of northern Kentucky newspapers before finding a place on the national news scene with a position at CNN, an intern role on “Talk Back Live” (secured via a Northerner connection) that turned into full-time employment with the news network. And from there she moved up into a variety of other titles and responsibilities, a hallmark of a CNN career.

“They like to build young talent,” she says. “It’s nice to be flexible in journalism in general, too. If you just want to be a reporter or whatever, that’s fine, but now you have to shoot your own stuff and be able to edit. So you really need to have multiple skills.”

Becker loved living amongst the youthful diversity of Atlanta, but Greater Cincinnati eventually beckoned her to return home. So in 2013 she packed up her car and headed north, interviewing for a WCPO associate producer position (thanks to a connection at CNN—journalists take care of each other) during the drive up I-75. “It worked out nicely,” she laughs. “A seamless transition.”

At WCPO, as was the case at CNN, the self-described “chameleon” performed a variety of roles, eventually earning the title of digital integration planner during the company’s “one newsroom” merger of television and digital. And when comics journalist Kevin Necessary pitched a multi-part illustrated story about a family of immigrants living in Cincinnati, she knew she wanted to be involved.

“Being a part of The Northerner was definitely my most memorable experience. I was on the staff for all four years. That was really where I gained real-world experience.”

“I was like, Oh my God, this is something that you don’t see on local journalism sites a lot,” she says. Becker paired Necessary with an on-air reporter, Breanna Malloy, connecting two journalists from different backgrounds to bring the idea to fruition. “I just kind of knew that there was something about this.”

The end result is a focused three-part, 10-chapter piece of comic journalism that tells the story of “Adriana” (real-life subjects’ names were changed), a U.S.-born teenager living in Cincinnati with her younger sister, older brother and mother, the latter two of whom are undocumented immigrants. It details how her mother ended up in the States, single and struggling to care for three children, revealing challenges and sacrifices that many of us don’t see. The story lays bare the fear undocumented immigrants feel, as well as uncertainty that’s commonplace among their children.

“There’s never been a time in the past year and a half that this story hasn’t been timely in our news,” says Becker, “with the conversation that’s going on in our country.”

Becker can’t say she was shocked to learn the story had received an Emmy nomination—pleased, yes, but she knew the piece was unusually good. “It wasn’t like I was trying to be a part of this to win awards,” she says, “but you go through the process of story formation and listening to the ideas Breanna and Kevin had. And then seeing that final product … I mean, I was blown away. I was almost in tears, which sounds kind of corny, but it was just so moving. I knew that pulling this off as a local news station was going to garner a lot of attention.”

And then, of course, “Living in the Shadows” took home the Emmy. Becker was the only one of the three team members able to attend the black-tie event in Louisville, so she prepared a speech (“I’m not an on-camera person. Those people can go up and ad lib. I can’t”) and, when her piece’s name was called, lived a few moments most journalists dream about. “It was just like what you’d imagine, where you’re in awe of what’s happening,” she says, detailing the lights, her shaking hands and the awkward moment when, upon exiting the stage, officials asked for the Emmy back—the one handed to winners is, it turns out, just a prop.

Today, Becker’s Emmy does sit on her mantle, but she’s quick to point out that, more than awards galas or even little golden statues, the Emmy win is about the work, which she is beyond happy to do.

“I’m very flattered and very lucky that I got to work on this,” she says,  “I’m just glad that the work is being recognized. The judges saw this piece was as special as I thought it was. And I’m glad that more people are able to see it. That’s what’s really cool—it’s another chance for people to hear this story.”