More Than Just a Degree

“It’s the moments like that that really just solidify this is what I want to do with my life. I’m meant to go into medicine.” 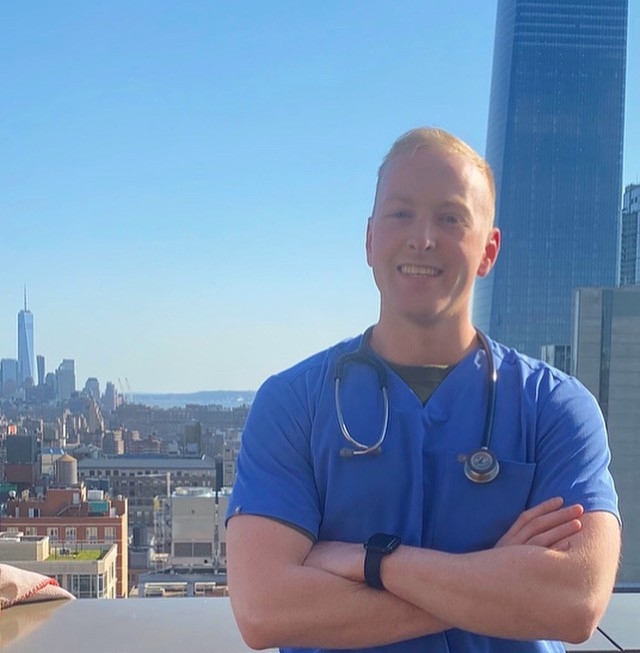 In the eighth grade, Dylan Young chose the topic of lethal pathogens for his school report. He was fascinated by the research behind these diseases. Little did he know, that school report started Dylan’s journey to becoming a doctor.

Dylan is heading into his junior year at Northern Kentucky University as a Biological Sciences major in the cellular and molecular tracks. Before he graduates, he already has a good amount of medical field experience under his belt.

Dylan currently serves as a member of the U.S. Army Reserves; he shipped off for basic training in 2018. During this gap year from college, he attended a medic school for four months in San Antonio, Texas, to become a combat medic. He now works as an emergency room technican at Mercy Health Anderson Hospital and is a licensed EMT in Ohio.

“Other than that, I’m a normal student,” he says.

Dylan stepped outside of his medic training and tapped into something else he is learning at NKU—a foreign language.

During the height of the COVID-19 pandemic, Dylan was called up by the U.S. Army Reserves to help out at the Javits Center, a field hospital in New York City. He eventually transferred to the Lincoln Trauma Center once things started to level out.

“Dr. Larson is an amazing professor, and even more amazing person,” Dylan says. “She’s been there every step of the way. She’s always quick to reply and always helpful.”

Because Dylan had access to those resources and Dr. Larson’s thorough teaching, he was able to help a Spanish-speaking patient.

It was in the early morning when this patient arrived and all the language translators had not come in yet. The patient was wheezing, his saturation had dropped and he was panicked. With those resources fresh in his mind and what he learned from his class, Dylan was able to help that patient.

“I’m not fluent in Spanish. I’m not going to pretend to be,” Dylan says. “I was able to get across the messages, and he was able to understand. He was very appreciative that I was at least trying.”

“It’s the moments like that that really just solidify this is what I want to do with my life. I’m meant to go into medicine.”

After taking a trip to Spain in high school, Dylan wanted to learn the language, but it happened to become an important part of his college experience and career. He even recommends that students look into the Spanish medical class that Dr. Larson will be teaching this fall. Spanish is the second-most spoken language in the U.S., and Dylan believes he can do a lot of good as a doctor who knows Spanish.

“So many people speak Spanish,” Dylan says. “In the emergency room, there are so many different people, speaking different languages.”

Dylan’s advice to students is to really put yourself out there, look at what you’re studying and take advantage of it.

“Imagine how many more people we can help,” Dylan says.